Recognizing the 28th Anniversary of the ADA 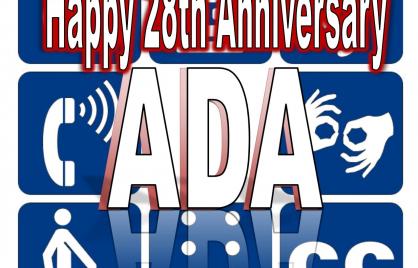 Recognizing the 28th Anniversary of the Americans with Disabilities Act

In recognition of the Act’s 28th anniversary, we continue to train District of Columbia Government Staff and community members on the ADA to ensure that the over 75,783[1] residents with disabilities in the District of Columbia are guaranteed rights and equal access under the law.

“We are not whole if we are not inclusive and for that reason we must continue fighting for the removal of barriers - both physical and attitudinal and for the rights of all people who are facing discrimination. The disability community is diverse and we must continue to work in solidarity with other social justice movements to ensure the equal access of all people. The 28th anniversary of the ADA is a celebration and also a reminder that we have more work to do,” DDC Executive Director, Alison Whyte.

“The 28th Anniversary of the ADA is a milestone for all Americans and we commemorate this moment but we honor this legislation by working to move forward into a broader era of diversity and intersectionality by improving opportunities and removing barriers for all citizens,” Chair, DCCPD, Kamilah Martin-Proctor.

Signed into law by President George H.W. Bush on July 26, 1990, the ADA is the most comprehensive federal civil rights law that prohibits discrimination against individuals with disabilities in employment, State and local governments, public accommodations, commercial facilities, transportation, and telecommunications. The ADA ensures that individuals with disabilities have equal opportunities to that of their peers.

Join ODR in celebrating the 28th Anniversary of the ADA through an interactive training series. Registration is free: https://adaanniversarytrainingseries.eventbrite.com

Recognition of the 28th Anniversary of the ADA [Word Document]